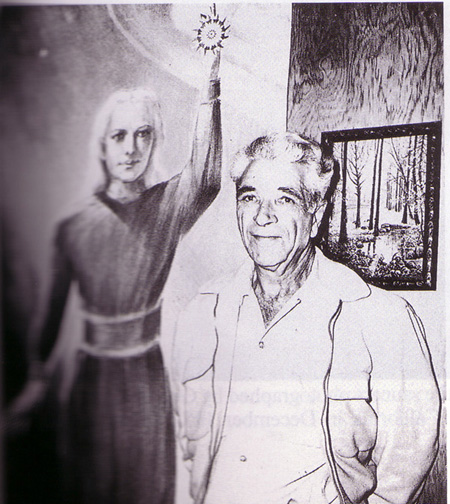 Despite having died over four decades ago George Adamski still remains one of the most discussed personalities ever to have been involved in Ufology. Always a controversial figure, Adamski came to be regarded by some as a “prophet” whilst others described him as a total fraud.

Adamski first saw the light of day on April 17th, 1891 in Poland. His parents decided that the U.S.A. offered far more opportunity and the whole family immigrated to Dunkirk, New York State when George was two years of age. Adamski was not particularly well educated as a child but overcame this with self-education.

In 1912 he joined the U.S. Army and served on the Mexican Border with the U.S. Cavalry until 1916 when he returned to civilian life working at Yellowstone National Park. He is also known to have been employed as a flour mill worker and a concrete contractor in Los Angeles.

Adamski displayed his capable and lively intellect when, in the 1930s, he founded an organization called “The Royal Order of Tibet” which provided a platform for him to expound his own philosophies of “Universal Law”. Quickly, Adamski became known as “the professor” despite the fact that he had received very little in the form of a formal education.

He then established a monastery at Laguna Beach, California, obtain a license from the authorities to make wine for sacramental and religious purposes (Prohibition was still the law of the land, at this time).  Adamski was later quoted as saying:

“I made enough wine for all of Southern California!”

Adamski was quite successful lecturing his own brand of philosophy but all good things must come to an end, which is what happened when prohibition was repealed and his wine was not in demand. Always resourceful Adamski and his wife Mary opened a café at PalomarGardens on the slopes of Mount Palomar in north San Diego County, California, on which the famous Mount Palomar Observatory had been established. Throughout all of this he continued to teach his form of esoteric philosophy and still held the loyalty of a number of his students who insisted on addressing him as “the professor”. Because of this “misidentification” Adamski was mistakenly taken as working at the Palomar Observatory itself, instead of running a café.

9th, 1946, he and some friends had observed a gigantic spacecraft whilst gazing at a meteor shower. He further claimed that an officer in the military had later confirmed that the craft was not of this Earth.

Adamski’s UFO experiences continued into 1947 when, in the summertime, he claimed to have watched 184 UFOs cross the skies in groups of 32. He backed these claims up with two photographs which he had taken using his 6 inch telescope.

On 20th November, 1952, along with six other people, Adamski drove out into the Mojave desert and at a location between Parker (Arizona) and Desert Center (California), they observed a large, silver cigar-shaped craft. Adamski’s companions on this occasion were:

Adamski set up his telescope in a place some distance away from the his companions where, he was later to claim, a silver disc-shaped craft landed from which there emerged a humanoid being with long blond hair. Communicating telepathically and with hand signals, the being gave his name as Orthon and stated that he was from Venus. He was very concerned about mankind’s interest in nuclear weapons. He warned about the dangers of nuclear war but would not allow Adamski to photograph him. Before going back into his craft, the blond man asked Adamski for one of his film cartridges. He then flew away leaving some strange footprints behind.( Adamski stated that he had actually taken plaster casts of the footprints )